Authors:
Thomas Mooney, SM; John Brueck, SM; Edward Gorman, SM
These firsthand accounts provide a vivid and colorful description of the trials and joys involved in the early years of the Society of Mary in the United States.

American Memoirs, the third book in the Sesquicentennial Series, contains the journal writings of Brothers Thomas Mooney, John Brueck, and Edward Gorman. These firsthand accounts provide a vivid and colorful description of the trials and joys involved in the early years of the Society of Mary in the United States.

The Society of Mary was founded by Father William Joseph Chaminade, a priest of Bordeaux, France. During the first of the terrible revolutions of the last century in that country, Father Chaminade, like many other ecclesiastics, was compelled to fly from the scene of his labors in order to save his life. Taking refuge in Saragossa, Spain, there before an image of the Blessed Virgin, called our Lady of the Pillar, he conceived the idea of founding an order of men who would devote themselves to the Christian education of youth. This would occur if God should ever bring him back to his distracted country. The revolutionary storm having at length blown over and peace and order restored, a concordat was concluded between the government and the Holy See by which religion was established again and its exiled ministers permitted to return. . . .

In 1824--that is, seven years after the establishment of the Society--our Good Father was able to send a colony of brothers to Strasbourg, and in 1830, what was formerly known as the Abbey of Ebermunster was purchased, and a novitiate was established there.

Up to this date, the house at Ebermunster has given more brothers to the Society than any other, and at the present moment it contains a postulate, a novitiate, and a scholasticate, all of which are in a most flourishing condition.

With these few introductory remarks, we turn from its history in France to the subject proper of this chronicle, namely, the record of the principal events in the establishment of the Society in this country (America) and in its subsequent history. In 1845, at the First General Chapter (assembled at St. Remy, Department of Upper Soane), Father Georges Caillet was elected as Superior General.

In 1848, Father Clement Hammer, a missionary from Austria who had accompanied Bishop Baraga of Marquette to this country, was pastor of Holy Trinity Church, the first German Catholic Church in Cincinnati. Having heard in his European travels of the success which attended the labors of the brothers of the Society of the Diocese of Strasbourg, this reverend father wished to see them introduced into this country.

With this object in view, he made known his desire to Father F.X. [Francis Xavier] Weninger, SJ, then stationed at St. Philomena, Cincinnati. This zealous missionary immediately opened a correspondence with Mr. Sigwart Mueller, an old fellow student of his who was an exile from his native land, Switzerland, and who resided in Ribeauvillé, Department of Upper Rhine [France]. In those days, as at the present day, our Society had a flourishing school in Ribeauvillé. Subsequently a correspondence was carried on between this same reverend father and Good Father Caillet; the result of which was that with the approbation of Right Reverend Bishop Purcell of Cincinnati the General Administration took measures to establish the first house in the New World.

However, to guard against mishaps which might befall the brothers about to be sent so far away from the seat of the administration, Good Father Caillet, with that prudence which always distinguished him, commissioned Father Leo Meyer to cross the ocean beforehand and examine things as he might find them and report on them accordingly.

This priest had joined our Society in 1827, having occupied for several years previous the important and difficult position of chaplain in the hospital and the prison of Strasbourg. After his novitiate he acted as chaplain in the flourishing collège of St. Remy, under the directorship of Father Lalanne, the present director of Collège Stanislas, Paris. In 1833 Father Meyer was transferred to Courtefontaine, where he was at the same time the superior of the brothers' community and a parish priest. In 1843 he was transferred to Ebermunster where he had charge of the novitiate and acted in the capacity of superior of the house; here it was that he was engaged when selected by the Good Father for the mission to America. Throughout his whole life, Father Meyer always was distinguished for his unbounded confidence in the intercession of St. Joseph, and in this, as in other things, he presents an example worthy of being imitated by all the members, but especially by all superiors of Society of Mary. About this time an incident occurred to which those who read this chronicle may attach whatever importance they please but which the write considers too interesting to be omitted.

Before setting out on his long and (in those days) dangerous journey, he was very desirous to know whether the object of it, that is, the establishing of a community of the Brothers of Mary in America, was according to God's will or not. For this purpose he consulted a holy virgin--an ecstatic named Elisabeth Eppinger--then living at Niederbronn, Department of Lower Rhine [France]. He received for an answer that our Lord had made known to her while [she was] in ecstasy that the Society of Mary was destined to do much good in America, but in the beginning the brothers would have to undergo many severe trials. Furthermore, she informed Father Meyer that he would be sent to America, but he would die in Europe. All these predictions were fulfilled literally, as the sequel will show. Moreover, at that time, she could have known nothing of any of them except by their having been revealed to her by God.

Being thus encouraged, the Reverend Voyager completed his preparations, and on a beautiful morning in the month of May 1849, he set sail from Le Havre for the New World. By referring to the Superior General's circulars of this date, it may be seen how Good Father Caillet recommends the voyagers and their object to the prayers of the Society. Father Meyer was accompanied by Brother Charles Schultz, who had been employed in manual labor at Ebermunster.

They landed safely in New York on the Fourth of July and proceeded forthwith to the convent of the Redemptorists on Third Street, by whom they were kindly received and hospitably entertained. Let it be noted that here commenced the many kind services rendered over twenty years by the good and zealous Redemptorists toward many of the members of the Society, services for which we pray that God may bless them and for which, too, all of us should feel bound to preserve the liveliest remembrance.

After having rested a few days in New York, the travelers set out for Cincinnati, notwithstanding their having been informed that the cholera was raging there, and in due time they reached the place of their destination.

Brief Notice of Mr. O’Neill, Postulant of Our Society in San Antonio

Early Mission Work of the Priests of the Society of Mary 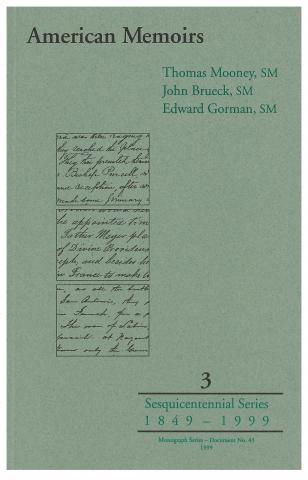