Drawn primarily from the Letters of Adèle and Father Chaminade, 145 biographical sketches are presented–133 are sketches of women who entered the Institute of the Daughters of Mary (Immaculate); eight describe women who lived in the convent, but did not join the Sisters; and four are vignettes of “sister-companions,” members of the Third Order. All these women were known to and interacted with Adèle during the twelve years between the founding of the Institute of the Daughters of Mary in 1816 and her death in 1828.

Pauline was certainly one of the more tragic figures of the early Agen community. Younger than her beautiful and talented sister Clémentine (though how much younger is unknown), she, like her sister, gave herself over to worldly amusements, dances and parties until her conversion by Larribeau. She then dedicated herself, together with Clémentine and their mother, to prayer and works of charity, eventually entering the Association. Though there seems to have been some obstacle to her (and Clémentine’s) entering the new religious foundation, it was overcome; she probably joined the community very shortly after its foundation. She was among those who took perpetual vows on July 25, 1817.

It seems that from the very beginning she experienced severe trials, difficulties and especially scruples. She was in direct correspondence with Father Chaminade, and he made it a point to answer her lengthy letters. By mid-1818, however, Chaminade was losing patience with her. He wrote to Adèle that she should tell Saint-Sacrement he wanted to hear no more of her scruples; let her serve the Lord with confidence and simplicity; and let her confessions be short and simple!

It soon became clear that Saint-Sarement’s mental balance was fragile, and already in 1819 she went through a period of severe instability. When, in January of1820, Soeur Stanislas was ill, Saint-Sacrement replaced her for a few days in the classroom, but the strain proved too much for her. She experienced what Adèle called an attack of nerves, her thoughts became confused, and she followed Adèle around wanting always to talk to her. Her head, Adèle wrote to Chaminade, was in a terrible state and, though her condition did not seem as bad as the previous year, it continued for several weeks.

Chaminade took pity on her and included her in a special Forty Days of Prayer; he asked Adèle, Mouran and Thérèse (her sister) to do likewise. He wanted Adèle to keep him posted on her condition and promised to give Saint-Sacrement special attention on his next trip to Agen. A week later, Adèle was able to report that Saint-Sacrement was better, almost her normal self.

But the recovery was short-lived. In April (1820), Adèle wrote a long letter to Chaminade detailing her concern. Saint-Sacrement had refused to receive her Easter Communion. She was at times so upset that Adèle would not have been surprised if she simply ran out of the convent. Saint-Sacrement was showing a totally other, and very worldly, self—in her walk, in her stance, in her demeanor, in her speech, in her singing. Though she was much more presentable now, she no longer seemed a religious.

Adèle was not sure but that Saint-Sacrement might even be possessed. Now that she was no longer concerned about humility or any other virtues, she was manifesting a disconcerting amount of intelligence, cleverness and aptitude. She seemed to be able to do almost anything she wanted, without even having learned: embroidery, drawing, painting, making artificial flowers, doing various types of decorating and artwork, making astounding progress in writing, in reading French and Latin, in music. She made two angels of cardboard, dressed them in knitted robes with silver and gold sequins, painted their faces beautifully and even curled their hair. 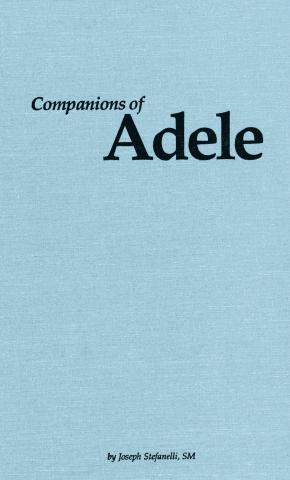