Authors:
Louis Reile, SM
In a literary world filled with Jason Bourne, James Bond, and Robert Langdon, we Marianists have our own exciting man of action: William Joseph Chaminade.

In a literary world filled with Jason Bourne, James Bond, and Robert Langdon, we Marianists have our own exciting man of action: William Joseph Chaminade. Yet, there is a critical element that separates our Blessed Founder from the rest. Chaminade actually existed, and the spine-tingling drama—chases, narrow escapes, forced exile, and long-awaited return to rebuild the Church of France—was all real.

Running Giant, a top-selling Marianist publication, is an easy-to-read historical retelling of the life and times of Blessed Chaminade that is true not only to the historical reality of Chaminade's life but also to the suspense it contained. This new printing has updated language that is suitable for today's readers, yet it retains the integrity of the original work.

This 137-page novel is an especially helpful introduction to the beginnings of the Marianist Family. The new printing has updated language that is suitable for today's readers, yet it retains the integrity of the original work. This book may be useful to teachers in a classroom environment or to promote discussion in small community groups. (Note: a reading guide is available for this book).

One morning, Father Chaminade was called to a sick bed in the heart of Bordeaux. Cazanes, a member of the Freedom Gang, now on his deathbed, was begging for a priest. Father Chaminade came, disguised in ragged coveralls and a huge frayed straw hat. He had hardly finished hearing the confession of the dying man, giving him Extreme Unction, when members of the Freedom Gang banged on the downstairs door.

Cazanes had been wounded in a fight the night before when some of the merchants started rioting during one of Jullien's priest-baiting speeches. When the young dictator hears that Citizen Cazanes was in critical condition, he sent six of his own bodyguards to visit the wounded comrade.

Mrs. Cazanes was frightened. Knowing for certain her husband was going to die, she decided to save herself by confessing immediately that Father Chaminade was in the room attending her dying husband. She would blame the priest, she decided, for her husband's death.

"The priest Chaminade? Here? After him!" The leader and his men charges up the stairs. In the sick room Father Chaminade heard their loud voices and guessed the trouble. "Go, Father, go save yourself," begged the dying man. "I am all right now. I am at peace." Father Chaminade hopped through the open window out to the sloping tiled roof. Quickly he grabbed hold of the gutter and then shinnied down the drain pipe. From the roof the Freedom Gang had already spotted him.

"We have you now, Chaminade!" sneered the hulking leader. He loosened a tile and threw it at the fleeing priest. The tile tore Father's shirt and gashed his shoulder. But he kept making his way down to the street. Three of the men had rushed downstairs and into the alley below.

"Look at the wall there, priest! You're trapped like the filthy gutter rat that you are."

The leader went inside and congratulated Cazanes on his strategy to get the priest inside the trap. Without realizing it, the Freedom Gang leader was congratulating a corpse. 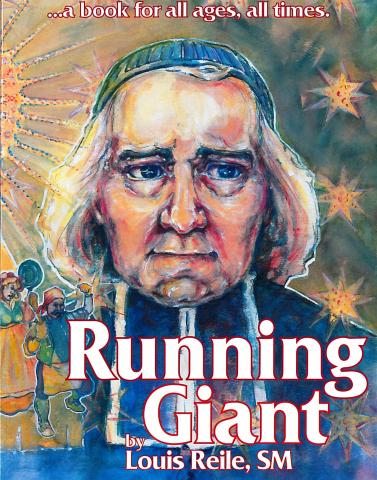